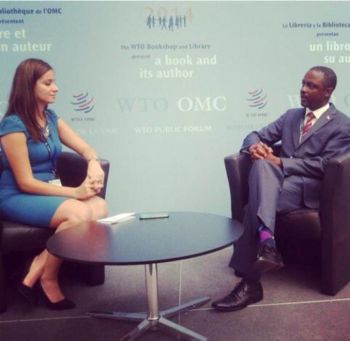 The Public Forum is the WTO's largest annual outreach event. It provides a forum for NGOs, civil society, governments, academia and the private sector to exchange views on issues related to international trade. It is also an opportunity for the WTO to listen and learn from its stakeholders. This year’s Forum was highlighted by the participation of Liberia’s Minister of Commerce and Industry in a panel debate on “Why trade matters to Africa”. WTO Director General, Roberto Azevêdo, Liberia’s Commerce Minister Axel M. Addy, Razia Khan, Managing Director, Head Africa Macro Global Research, Standard Chartered Bank, among others.

This year the Forum focused on Africa and how trade impacts its development.

Africa is the new frontier for development: In the last decade it has held a steady growth of more than 5 per cent, a rate above the worldwide average; foreign direct investment has tripled and consumer spending will double in the next ten years. Economically, this renewal is driven mostly by exports of natural resources, commodities and improved macroeconomic policies. However, questions arise regarding the sustainability of this model.

Minister Addy, who as primed discussant on the panel, expressed thanks to the WTO for the invitation and appreciated the United States of America and other partners for working with Liberia during these critical times. Minister Addy indicated that Liberia is a country that believes in the multilateral trading system and stated that months of travels across Liberia gave him confidence in the resilience of the country to overcome the unexpected Ebola outbreak.

He emphasized that aid for trade is one key way to ignite trade opportunities across the continent. The Minister further stressed that Africa’s growth has been stalled by the lack of institutions and the complicated cultural nuances that were not considered during the days of colonization. In the middle of the debate, the Minister pointed to investment in the hard and soft infrastructures, as one of the direct ways Africans are trying to get the continent back on the right trajectory. He emphasized the importance of skills revolution for young people and women and the need to position investment in a way that the environment is protected. The Minister concluded by reasserting the relevance of aid for trade in Africa’s development and asserted that Africa needs more, and it is clear that the world is a better place when Africa is a better trading partner.

Minister Addy’s mission to Europe has seen him participate in the International Growth Center panel discussion in London, United Kingdom and the General Assembly of the World Intellectual Organization (WIPO). His delegation is composed of Assistant Minister for Commerce, Hon. Steve Marvie, who is the technical lead on WTO matters, Mr. Roland Walter Morris, Liberia’s lead on IPR and consultant at the Ministry, and Liberia’s Charges d’affairs at the Permanent Mission in Geneva, Mr. Paul Tate. The delegation is complemented by Mr. Major Clemens and Jefferson Fahn, who are based in Geneva under the capacity building program between the WTO/ITC and the Ministry of Commerce and Industry.