Ministry of Health Gets Medical Disinfectant Worth 144K Euro 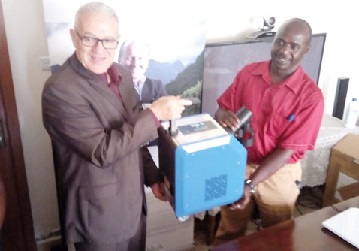 Monrovia, Liberia. 09.06.2017 - The Ministry of Health on Wednesday received a large consignment of medical disinfectant materials worth over 144,000 Euros (US$161,335) from Numelec, a Swiss group in partnership with Vice President Joseph Nyuma Boakai to improve the country’s health sector. Both parties welcomed the intention to further strengthen relations. After the Swiss Agency for Development and Cooperation handed its projects in Liberia over to a Liberian partner at the end of 2016, Switzerland has been represented since March by an Honorary Consulate General in Monrovia.

The Ministry of Health on Wednesday received a large consignment of medical disinfectant materials worth over 144,000 Euros (US$161,335) from Numelec, a Swiss group in partnership with Vice President Joseph Nyuma Boakai to improve the country’s health sector.

Presenting the items to the Ministry recently, the president of Numelec, Mr. François Wahl, disclosed that the donation resulted from Vice President Boakai’s recent visit to Geneva, Switzerland where he requested for better health care delivery services in Liberia.

Wahl said during the VP’s visit, the need to have foreign aid to buttress government’s efforts to strengthen the country’s health sector was the priority issue which prompted the Swiss group to send the medical supplies to Liberia.

He explained that when it comes to health expenditure, Liberia has the lowest in the world, and recommend that new health centers be built, old ones renovated and to have current medical technologies introduced, “because when the health of the people is improved, it will reduce poverty, vulnerability and improve productivity, economic growth and health investment.”

According to Whal, the disinfectant is a no-touch technology that makes life easier for infection free perfectionists, patients and healthcare workers. “The disinfectant materials are critical to hospitals because they help reduce the high death rates and will be used to help protect the hospitals against any outbreak,” he said. Mr. Wahl stated that the estimated cost of the materials is over 144,000 Euros, adding that the materials require users to be well trained before operating them for effective use.

“For the first phase of our work with these materials in the country, we will train health workers on how to use them to ensure that the health sector yields more positive results,” he said. In response, VP Boakai told the gathering that the donation by the Government of Switzerland was based on an appeal to it for medical supplies to improve Liberia’s health sector.

“This has always been my appeal when I travel to other countries – to see a difference in my country especially when it comes to the good of the country,” the VP said. “When we were in Geneva I was wondering what the people would appreciate, so I suggested the health sector, which is my key priority. And so, this is what they brought to improve our health sector, and we welcome this contribution to the healthcare delivery of our country.”

Minister of Health Dr. Bernice Dahn lauded the people of Switzerland for the major support to the Ministry especially when the country is at the rebuilding stages of its health system.

“I remember during the Ebola crisis a carrier of Ebola died in one of the hospitals and we had to close the entire hospital down for a longer period of time because we didn’t have disinfectants to disinfect the entire area. With these supplies of medical disinfectant our hospitals and patients will be in a safe environment,” she said.

Minister Dahn promised to put in place mechanisms that will ensure the proper use of the materials.