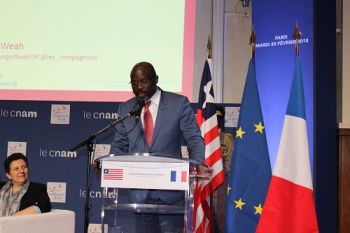 Paris, France. 21.02. 2018
President George Manneh Weah has arrived in Paris, France following a successful State visit to Senegal; and a working visit to Morocco where he met with several partners, Moroccan Government officials and potential investors. According to a dispatch from Paris, the Liberian leader arrived in Paris on Tuesday, February 20, 2018. President Weah, upon arrival, paid a visit to Conservatoire National Arts et Métiers, a Technical University. During the visit, President Weah addressed over 400 students and authorities of the institution. The President used the visit to inform the University authorities of challenges confronting the educational sector in Liberia; the need to assist Liberian students; and the educational sector in general.

On Wednesday, January 21, 2018, President Weah paid a courtesy visit on a Network of French businesses named and styled (MEDEF). The Movement des enterprise de France consists of over 750,000 members and firms; and places job-creation and sustainable growth at the heart of its action. MEDEF promotes entrepreneurship and defends free enterprise. At the meeting, the President informed the group that Liberia is opened for business and that he’s encouraging French businesses to come and invest in Liberia.

The Liberian leader outlined the construction of roads, agriculture, healthcare, education and sports; coupled with the need for Liberia to fly its own airline under the banner of Air Liberia - as some of the immediate investment needs of the country. President Weah then invited members of the French Business Network to send a delegation to Liberia within the shortest possible time to assess various investment opportunities.

Meanwhile, President Weah was officially welcomed at the Palace de Elysee at 1pm local time by his French counterpart, President Emmanuel Macron, where he presented his agenda for development and sought France’s assistance in implementing his goals