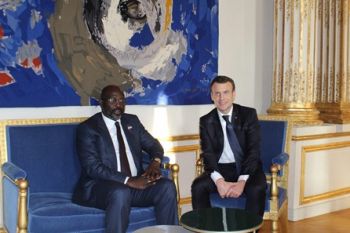 Paris, France. 22.02.2018
President George Manneh Weah has received a red carpet welcome from his French counterpart, Emmanuel Macron on his first official State visit to France, on Wednesday, February 21, 2018. The President was received at the Palace Elysee to a rousing welcome by the French Head of State and officials of the French Government. According to a dispatch from Paris, upon President Weah’s arrival, a luncheon was held in honor of the Liberia leader and delegation, which was followed by bilateral talks between the two leaders and a press stakeout. President Weah used the press stakeout to express gratitude to France, noting that he was proud to be back in a country where his journey to stardom started. He enumerated his experience as a migrant who came to France about 29 years ago in search of better opportunity.

President Weah attributed his success story to his longtime coach and mentor, Arsène Wenger, of Arsenal and the great people of France. He said he owes a debt of gratitude to France for giving him the opportunity to triumph. The Liberia leader reminded the people of France that he is indeed a product of France. President Weah also informed his French counterpart, President Emmanuel Macron that he was in France this time as President of the Republic of Liberia to seek the same opportunity and chances that France gave him to succeed for the people of Liberia.

He recalled the enormous tasks he has been entrusted with since his inauguration as the 24th President of Africa’s oldest independent nation to lead the Liberian people from poverty to peace and prosperity. However, he was quick to remind his French counterpart that peace without prosperity is an “unfinished agenda” and acknowledged that this will be the greatest challenge of his administration.

President Weah told his counterpart that he inherited an economy that is in ‘stagnation’ and still bleeding from the recovery of the devastating Ebola outbreak that took place 4 years ago. He further informed his colleague about the deplorable state of the Liberian economy and underscored that while Liberia remains one of the poorest countries in the world, yet it is endowed with an abundance of natural resources.

He said it was due to mismanagement of the natural resources and the marginalization of the majority of Liberians that his government has placed “Pro-Poor Policy” at the center of development. President Weah furthered he inherited a broke government plagued with unemployment, which is at an unprecedented high; inflation on the rise, the Liberian currency in a free fall state; and our foreign reserve is at an all time low. He said expectations remain high, and he is concerned that his government may not be able to deliver on the promise of change for the betterment of the Liberian people without urgent and significant assistance from friendly governments such as France.

President Weah then made a passionate appeal to his French counterpart to assist his administration in any way to help jumpstart the Liberian economy. He named the construction of roads, agriculture, education, healthcare and the high unemployment of Liberian youths as key priorities of his leadership. He concluded by expressing profound gratitude to his counterpart and the great people of France for the warm reception accorded to him and delegation and stressed the need to further strengthen the longstanding and great relationship between Liberia and France; as well as forge partnerships for the mutual benefit of their respective countries.

Meanwhile, President Weah’s visit to France yielded remarkable dividends for his young administration, as the French Government has placed Liberia on its shortlist of Bilateral Official Development Assistance (ODA). The decision came into effect on February 6, 2018 in anticipation of President Weah’s visit. As a result of being shortlisted on the French Bilateral Official Assistance Program, France has pledged an initial grant of €10 million Euros to Liberia for immediate road maintenance while modalities are worked out for a more comprehensive and sustainable development assistance package for Liberia.

In further support to the Weah-led administration, French President Macron will also travel to the European Union (EU) within two weeks along with a Technical Team from Liberia to rally support for the construction of roads.

Additionally, the French Government will also introduce of its new Economic Empowerment Program dubbed: “Agriculture through Sports,” which Liberia stands to benefit from. This will be done through the construction of sporting facilities and the provision of sporting materials and other logistical support. The President of France has determined that sports is one of the best ways to promote development in Africa and has therefore embarked on a sports development program.

In another development, the FIFA President, Gianni Infantino, who was invited by the French leader to the launch of his Development through Sports Program, was among a host of sports officials representing various institutions including the National Basketball Association. The FIFA boss informed President Weah that FIFA has allocated half a billion United States Dollars towards the development of sports in Africa. He assured President Weah that Liberia will be amongst the countries in Africa that will benefit from the pilot project.

While on his official State visit to France, President Weah also met with the Vice President of the World Bank, Makhtar Diop. The meeting concluded that an additional budget support of US$20 million will be provided in June of 2018. This is in addition to the US$24.7 million grant earlier given to Liberia by the World Bank. President Weah also secured additional financing of US$5 million from the World Bank Social Protection Program to enhance his sports agenda. He also initiated discussions leading to the front-loading of US$45 million of additional financing from Liberia’s 3-year allocation of $210 million to help stabilize the Liberian economy.

President Weah used his meeting with several French businesses, investors and private institutions to rally support for his government and the people of Liberia in an effort to encourage investments and revive the Liberian economy. He enjoined French investors to replicate in Liberia - their investments being undertaken in other African countries.