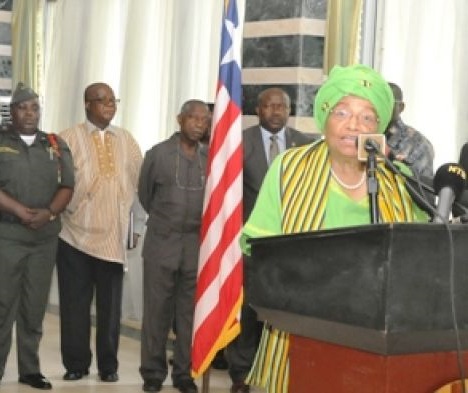 President Ellen Johnson Sirleaf is again pleading to countries around the world to join the fight against the Ebola virus disease. “This is a fight in which the whole world has a stake,” the Liberian leader cautioned; adding that this disease respects no borders. “The damage it is causing in West Africa, whether in public health, the economy or within communities – is already reverberating throughout the region and across the world.”

According to an Executive Mansion release, President Sirleaf made the assertion in a “Letter to the World” aired on the British Broadcasting Corporation (BBC) world news on Sunday, October 19, 2014.
She warned that Ebola which has taken hold in three fragile states – Liberia, Sierra Leone and Guinea – it is the duty of all, as global citizens, to send a message that they will not leave millions of West Africans to fend for themselves against an enemy that they do not know, and against whom they have little defense.

The Liberian leader urged governments, international organizations, financial institutions, non-governmental organizations, politicians and ordinary people on the street or in any corner of the world, that all have a stake in the battle against Ebola.
“The time for talking or theorizing is over. Only concerted action will save my country, and our neighbors, from experiencing another national tragedy,” the Liberian leader urged, quoting the words of Henrik Ibsen that “A thousand words leave not the same deep impression as does a single deed.”

She indicated that initially the international reaction to this crisis was inconsistent and lacking in clear direction or urgency. Now, she said, the world has woken up. “The community of nations has realized they cannot simply pull up the drawbridge and wish this situation away.”
President Sirleaf reiterated that the fight against the Ebola virus disease requires a commitment from every nation that has the capacity to help – whether that is with emergency funds, medical supplies or clinical expertise.
Speaking about the devastation that the Ebola virus disease has done to Liberia in particular, President Sirleaf said in just six months, the virus disease has brought the country to a standstill. “The virus has been able to spread so rapidly because of the insufficient strength of the emergency, medical and military services that remain under-resourced and without the preparedness to confront such a challenge,” she stressed, noting that this would have been the case whether the confrontation was with another infectious disease, or a natural disaster.

The Liberian President indicated that over 2,000 Liberians have died, some who are children struck down in the prime of their youth, fathers, mothers, brothers, sisters or best friends, including many brave health workers that risked their lives to save others, or simply offer victims comfort in their final moments.

However, President Sirleaf stressed that Liberians are a resilient people and as such, have the capacity as global citizens to face down this disease, beat it and rebuild. “History has shown that when a people are at their darkest hour humanity has an enviable ability to act with bravery, compassion and selflessness for the benefit of those most in need,” she pointed out.