The Road to Liberia`s Accession to the WTO 2015 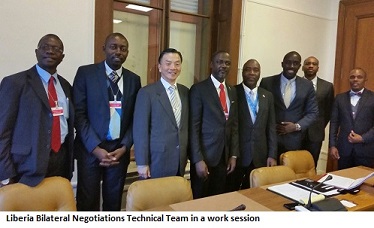 On Tuesday, 27 January 2015, Liberia’s Minister of Commerce and Industry, Hon Axel M. Addy led a delegation to the World Trade Organization (WTO) to hold bilateral trade negotiations on the negotiation inputs – Goods and Services Offer, Legislative Action Plan, Action Plans on Sanitary and Phytosanitary (SPS) Measures and Technical Barriers to Trade (TBT), and the Responses to Members’ Questions – in advance of Liberia’s Second Working Party Meeting in March 2015. The Mission was also an opportunity to get a feel from the first 2015 meeting of the Informal Group on Accessions (IGA), which was attended by Joachim Reiter, Liberia’s Chairman of its Working Party Meeting.

Bilateral market access negotiations were held with the United States of America, European Union, Canada, Japan, and Chinese Taipei. Most of the substantive issues pertaining to the negotiations relate to clarity on Liberia’s commitment to implement the ECOWAS Common External Tariff (CET) and the commitments made in Accounting, auditing, and bookkeeping services, along with approval requirements for private sector participation in engineering services, protection of intellectual property rights for plants varieties, and the lease regime for foreign investors.

The United States of America and Chinese Taipei, a customs territory within the WTO, have sent the signal for Liberia to sign the Information Technology Agreement (ITA) – an agreement which advocates zero duties on IT products (computer hardware, subassemblies, and peripherals, computer software, semiconductor manufacturing and testing equipment, telecommunications and electronic components, etc.). Canada requested Liberia to grant equal tariff treatment (parity at the bound level) to soya bean, canola, etc.

With the US and EU proffering different positions on the audio-visual text in the Services Offer, Liberia has proposed that the disagreement on audio-visual text between the EU and the US be upgraded to a trilateral forum among all parties. With support from the WTO Secretariat, the Mission also benefited from capacity building in SPS and TBT – and currently an extended mission is being facilitated by the WTO Secretariat to ensure that all the Action Plans for the TBT and SPS are properly documented and aligned to the WTO Agreements on SPS and TBT. The work on SPS and TBT Action Plans is being coordinated with the teams at the Ministry of Agriculture and Ministry of Commerce and Industry.

It can be recalled that Minister Addy and delegation did two Pulse Check Missions to Geneva in 2014 to engage with the WTO Secretariat and evaluate the preparedness and speed of Liberia’s accession. There is light at the end of the tunnel, with the transmittal of a letter from H.E. Madam Ellen Johnson-Sirleaf in May 2014, the response from WTO Director-General Roberto Azevêdo, and the submission of the key negotiation inputs to the WTO Secretariat, despite the Ebola Outbreak. These actions impressed on members the seriousness of Liberia’s intention to become the 161st member of the WTO.

At the conclusion of the negotiations in mid-February, Liberia intends to cautiously fast track its accession and beginning drafting the Working Party Report to fulfill the early accession harvest at the Tenth Ministerial Conference of the WTO in Nairobi, Kenya in December 2015.

It is important to stress that Liberia’s would-be membership to the WTO is important for investment in non-traditional sectors, like tourism, fisheries, education, and health to spur economic growth and development. Cape Verde and Cambodia, along with Rwanda, have demonstrated that accession to the WTO and a predictable business environment are important elements for economic growth.